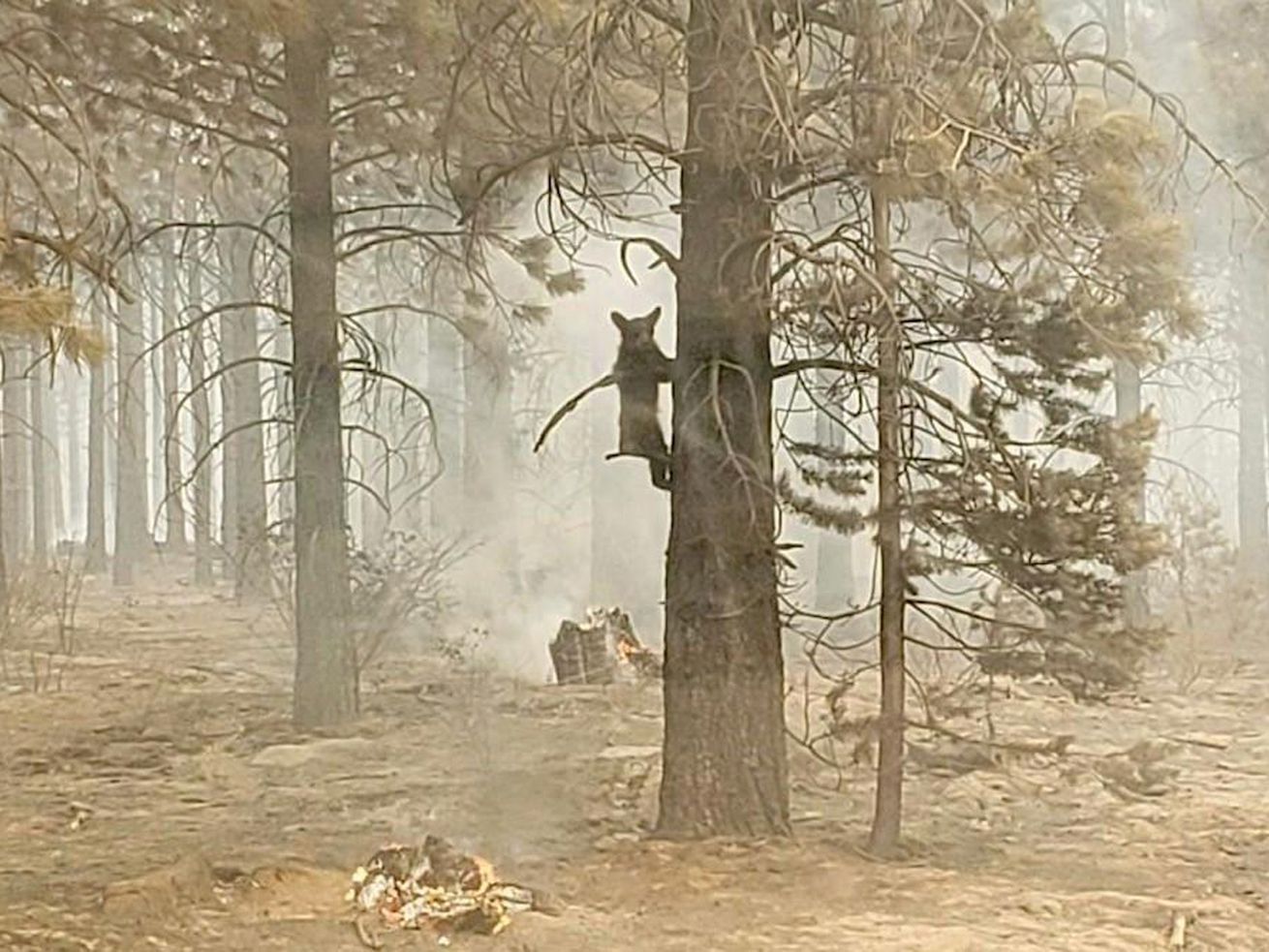 In this photo provided by the Bootleg Fire Incident Command, a bear cub clings to a tree after being spotted by a safety officer at the Bootleg Fire in southern Oregon, Sunday, July 18, 2021. As more fire personnel moved into the area, the cub scurried down the tree trunk and later left after being offered water. Smoke and ash from the wildfires have drifted thousands of miles, reaching as far as New York. In Chicago, a blanket of thick haze covered the sky and turned it milky white. | Bryan Daniels/AP Photos

The lingering smoke also caused air quality advisories to be issued for some parts of the United States, including Indiana.

Chicago is seeing the effects of the wildfires out west this week as smoke clouded the city’s sky and turned the sun orange and red hues.

Massive amounts of smoke and ash from the raging fires in southern Canada, California, Portland, Montana and other states have drifted thousands of miles, reaching as far as New York. In Chicago, a blanket of thick haze covered the sky and turned it milky white.

“There are some clouds as well but a lot of the high stuff and even some of the lower visibility we have as a result is that smoke that’s around,” National Weather Service meteorologist Kevin Birk said Wednesday.

The lingering smoke also caused air quality advisories to be issued for some parts of the United States, including Indiana. People with chronic respiratory issues, like asthma, should limit prolonged outdoor activity in the Hoosier State through Thursday, Birk said.

Free school lunch is now an option for 6.2 million students in California, regardless of income

Nearly 80 fires remain actively burning across 13 states and more than 1.3 million acres have been scorched, according to the National Interagency Fire Center.

The nation’s largest wildfire, Oregon’s Bootleg Fire, grew to 616 square miles — just over half the size of Rhode Island. Fires also burned on both sides of California’s Sierra Nevada and in Washington state and other areas of the West.

Birk expected the haze to remain in the city through at least Thursday but said it could stay into Friday due to the little change forecasted in the area’s airflow pattern.

Birk said the phenomena of smoke from wildfires floating to the Midwest is “certainly not unheard of,” but couldn’t say if it was happening more frequently.

Would Broncos have interest in Aaron Rodgers at this year’s trade deadline or next offseason?

Apple-leased buildings in Cupertino are grabbed by big NYC investors