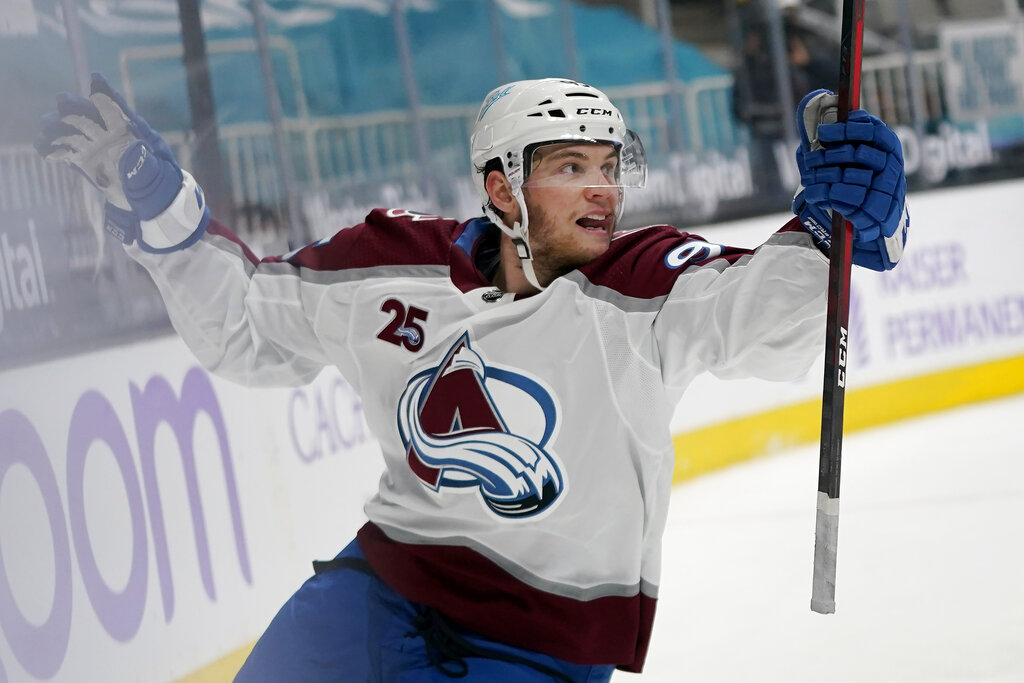 Burakovsky, who set up the play that got Colorado within 3-2 at 1:18 of the third period, changed for Mikko Rantanen in the second shift of OT and drove in between the circles and fired a wrist shot off the glove of goalie Martin Jones, who saw the puck roll across the goal line behind him.

It was the first shot of the game for Burakovsky.

“Definitely nice to see it go in,” he said.

The victory got Colorado within two points of the West Division-leading Vegas Golden Knights, who fell 6-5 at Minnesota earlier Monday. The Avs, who have six remaining games, have a game in hand over the Knights.

The Avalanche rallied from 3-1 and 4-2 third-period deficits. It got goals from forwards Valeri Nichushkin, Gabe Landeskog and Nazem Kadri to force overtime. Kadri tied it 4-4 at 16:21 with his first goal in 20 games.

Evander Kane capitalized on the first, making it 1-0 at 3:20 of the first period after Nichushkin was sloppy with the puck twice on the same play. The second came 1:57 into the second period when Colorado defenseman Patrik Nemeth made an errant pass into the skates of teammate Tyson Jost, and San Jose’s Tomas Hertl came up with the puck and beat goalie Philipp Grubauer from the top of the crease.

Fundstrat's head of digital assets research walks us through his $100,000 and $10,500 year-end price targets for bitcoin and ether — and shares the 8 tokens he's bullish on

Kane scored the Sharks’ second goal on a semi-breakaway, following an Avalanche offensive-zone turnover by Landeskog. The Sharks produced 13 of the 15 shots in the second period — which might have been Colorado’s worst frame of the season.

Conor Timmins is a poor man’s Cale Makar. The Avalanche is stacked with that style.

Avalanche and expansion draft: Who will Colorado protect from the Kraken?

Avalanche coach Jared Bednar said the club’s top prospect, forward Alex Newhook, will likely make his NHL debut at some point during this five-game road trip. Newhook, 20, has had just one ice session with the Avs, which was Monday’s morning skate at SAP Center. Newhook, who signed …read more