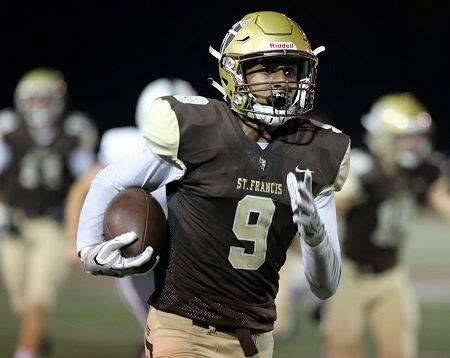 St. Francis football coach Jim Bonds has coached his fair share of talented football in his 20 years as coach.

Yet even those players don’t have more youthful flair and exuberance than wide receiver Bryson Reeves. And if you need evidence — just ask Bonds.

“He is definitely a free spirit – no one can dispute that,” Bonds said of Reeves. “He walks to the beat of his own drum. He has a great sense of humor and is very mature for his age.”

The path Reeves walks these days could prove to be lucrative some day. Many football scouts consider him to be one of the top wide receivers in Southern California. The 6-foot 1, 190-pound junior has amassed 22 college scholarships offers.

His first one was in the fall of last year when William & Mary expressed interest. His latest offer is from Fresno St. He also has offers from Vanderbilt, Harvard, Yale, and UNLV, among others.

“It’s been a blessing to have all these offers,” Reeves said. “I was surprised to have received the offer from Harvard. My mother liked that offer a lot.”

Prior to high school, Reeves was considered a good player who played running back and middle linebacker while tipping the scales at 225 pounds. When Reeves arrived in the summer of his freshman year of football at St. Francis, most of the Golden Knights coaches saw room for improvement.

“He was a little pudgy when he got here,” Bonds said. “He played running back in his first year, but with the group of running backs that we had in the program, it only made sense for him to move to wide receiver.”

Most of the student-athletes at St. Francis play more than one sport. After Reeves’ freshman football season, he decided to try out for track and field — the first time that Reeves had participated in the sport. However, under the tutelage of longtime respected track coach Mike Russell, Reeves got faster and shed some weight.

“I had not run track consistently like that,” Reeves said. “I was doing all the sprint races along with the high jump. I had to lose a lot of that weight so that I could get over the bar.”

All the training paid off. Along with a change to a more protein-heavy food program, Reeves trimmed 35 pounds before the start of his sophomore year. The transformation from being a think-bodied running back to a slimmed-down wide receiver made all the difference for Reeves before the 2018 campaign.

“I knew it was coming,” Reeves said when he was asked about the move to wide receiver before the season. “The transition wasn’t that hard because – it’s football. I’m a football player. I want to do everything. I want to be on special teams, offense and defense. Just teach me how to do it.”

The season didn’t get off to a smooth start. In the first four …read more