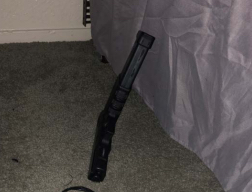 OAKLAND — A Bay Point man was charged with illegal gun possession, after authorities raided his home and found a gun leaning up against a bed where he was sleeping with his girlfriend and infant child, prosecutors said.

Charles Pettus was charged with being a felon in possession of a firearm, which carries a maximum term of 10 years in prison. The charges stem from a May 14 raid by federal and state authorities.

According to the complaint, police raided Pettus’ home on the 2000 block of Deltaview Lane in Bay Point and found a Glock pistol with an extended magazine, capable of firing 24 rounds. The gun had been reported stolen out of Antioch in 2016, the complaint says.

Both Pettus’ girlfriend and a man that was sleeping in a guest bedroom denied the gun was theirs, the complaint says.

Pettus has prior convictions for robbery and being a felon in possession of a firearm, the latter of which earned him a prison term of more than four years, the complaint says.

Pettus did not enter a plea at his last court hearing on May 29. His next court date, a preliminary hearing, was set for June 12. In the meantime, he remains in Santa Rita Jail, in Dublin, court records show.