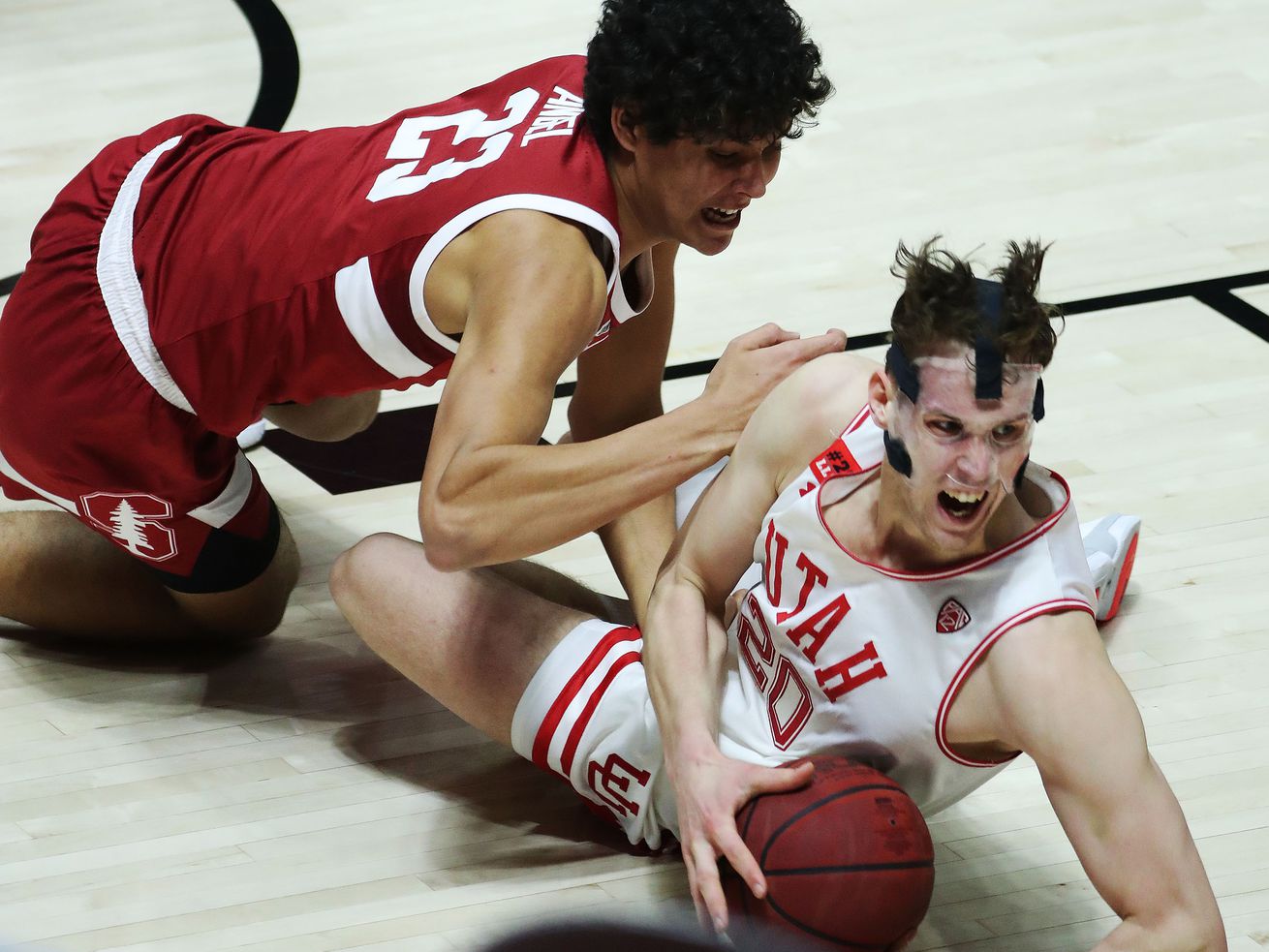 Despite playing with a fractured nose the past month, Ute sophomore from Finland leads the Pac-12 in field goal percentage heading into Utah’s road swing at Washington State on Thursday and Washington on Sunday

A lot of basketball players get so comfortable wearing a protective mask, usually for a fractured nose, that they continue to wear it even though their injury has healed.

Runnin’ Utes forward Mikael Jantunen is not one of those players. The sophomore from Helsinki, Finland, will scrap his clear mask the first chance he gets, which for him is Saturday, Jan. 23.

“I have to wear it for four weeks, so my time is almost over,” Jantunen said in Zoom call with reporters Tuesday. “It is going to be up on some kind of shelf. I am not going to keep wearing it.”

“I have to wear it for four weeks, so my time is almost over. It is going to be up on some kind of shelf. I am not going to keep wearing it.” — Utah basketball player Mikael Jantunen

Even with the mask, which he began wearing in practice shortly after Christmas, Jantunen is quietly putting together a solid second season in Salt Lake City.

“It is not awful to play with, but I do like to play without it way more,” he said. “It is kinda hot playing with it, and it is not the most comfortable thing.”

After taking Sunday off following Saturday’s disappointing 72-63 loss to Cal in which they blew a 12-point halftime lead, the Utes returned to practice Monday vowing to stay unified and hungry, Jantunen said.

“We have shown that we can play great basketball,” he said. “Now we just gotta do it for 40 minutes. We have to stay locked in, stay together as a team and just grind it out. We have a group of players that can do it and can figure it out.”

As has been well-documented, Utah hasn’t had a Pac-12 road win since Feb. 23, 2019, a 92-79 breakthrough at WSU. They lost 71-63 at Colorado a week later, went 0-9 in conference road games last year, then started league play this season with losses at UCLA and USC.

That means the conference road losing skid is 12 games heading into the best opportunity to end it, considering WSU and UW are at the bottom of the Pac-12 standings.

“I feel that the biggest thing is we have to stay locked in on defense,” Jantunen …read more

Where do Alex Smith and Zach Wilson rank among the best college quarterbacks of the 2000s?

(Visited 1 times, 1 visits today)
Justin Timberlake APOLOGIZES to Britney Spears and Janet Jackson
On Friday, Justin Timberlake took to Instagram to issue an apology to Britney Spears and Janet Jackson. The singer’s apology comes after ‘The New York Times Presents: Framing Britney Spears’ documentary, which premiered last week and led many viewers to express their ‘disappointment’ and ‘disgust’ with how Timberlake handled their breakup. Other viewers also pointed out his behavior towards Jackson after the infamous ‘wardrobe malfunction’ that occurred during their Super Bowl halftime performance in 2004.

COVID-19 scare won’t keep Utah women’s basketball team out of Pac-12 Tournament, but not all the Utes will be available

What’s next for Alex Smith? Report of expected release in Washington leaves questions