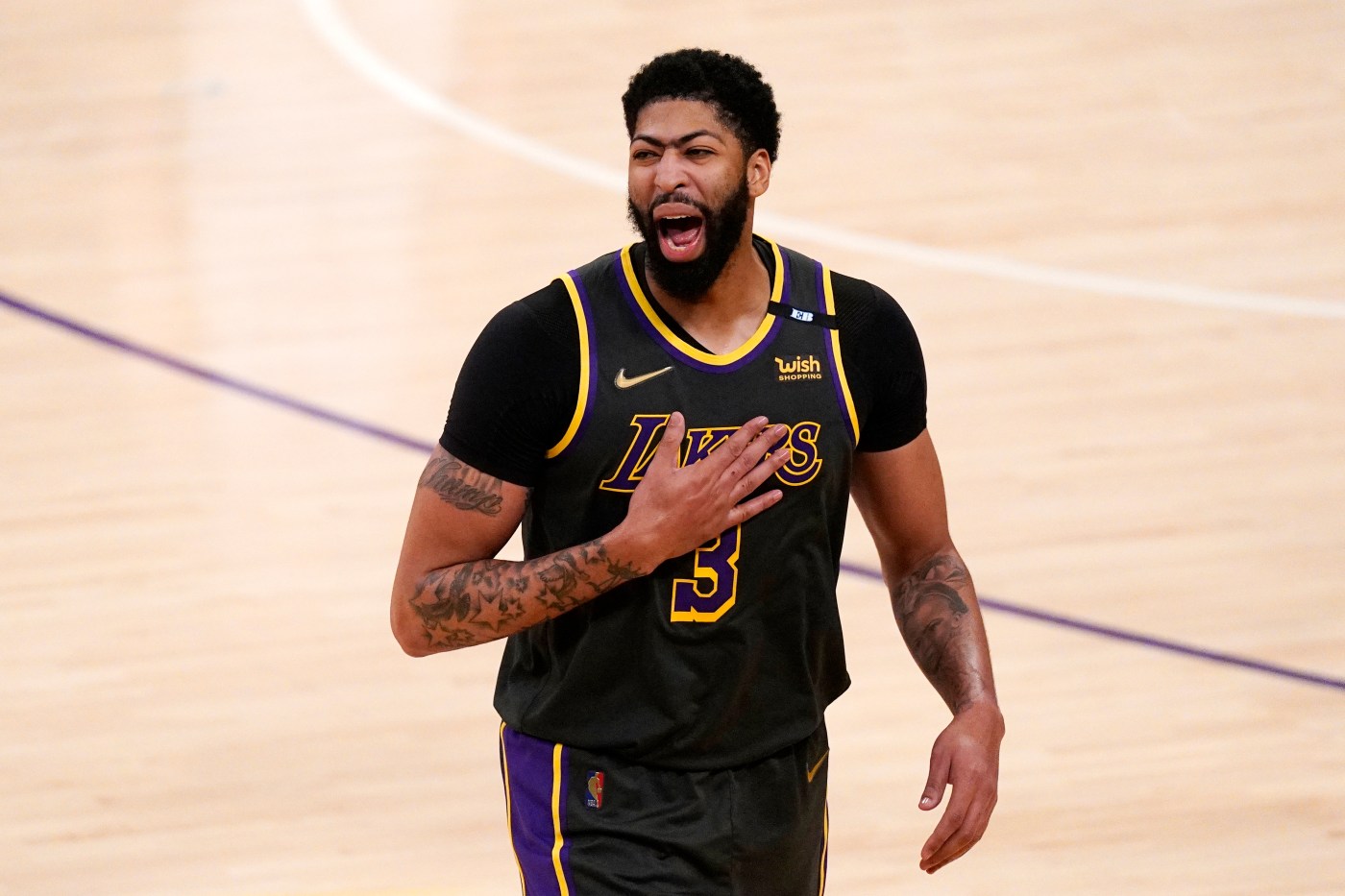 At last, they played as if they recognized the gravity of the situation.

And, at least, they stopped falling.

The Lakers, in fact, reached up and regained sole possession of fifth place in the Western Conference standings on Monday night. If you’re wondering why that is so strut-worthy, you haven’t been around lately.

The purple-and-gold welcome mat that was defenseless against Sacramento and Toronto came to life and played like wounded underdogs Monday night, which is not their accustomed stance but fit quite well.

They beat the Denver Nuggets, who had won nine of 10, by a 93-89 score and distanced themselves, however temporarily, from the pre-playoff play-in tournament.

“It was just the heart, the togetherness,” said Wesley Matthews who, with Marc Gasol, escaped purgatory and served the Lakers well in the second half. “We put our feet in the ground, put them in the sand, whatever that saying is.

“Nobody is going to feel sorry for the Lakers. We have to build on what we did. You have to play with a sense of desperation. When you do that, the ball finds energy. That’s how we played tonight.”

Stripped of options without LeBron James and Dennis Schröder, the Lakers put Monday’s game into the mitts of Anthony Davis, who had missed 11 of 16 shots in Sunday’s eyesore loss to the Raptors. They placed him on the left side of the line and made Nikola Jokic and, later, JaVale McGee play honest defense, and Davis finally looked commanding, with 16 first-half points. He wound up with 25, but his biggest play was an improbable, Beamon-esque lunge that managed to deflect a 3-point shot by Facuno Campazzo at the end.

Frazzled for most of the game, Denver uncorked a 14-2 run in the fourth quarter and actually could have gotten to within one point on Michael Porter Jr.’s 3-pointer. It was disallowed because Campazzo was whistled, oddly, for an illegal pick on Davis.

Luck also visited the Lakers, for the first time in a while, when Jalen Horton-Tucker drove into the lane, ahead by two. He offered an off-balance reverse layup that was kept alive by Gasol, who was being blocked out by Jokic. Horton-Tucker then grabbed it and scored for a four-point lead with 15.1 seconds left, and rolled his eyes in gratitude.

“I’ve got to thank God for the way that worked out,” Horton-Tucker said.

Gasol played 17 minutes with 10 points and seven rebounds and a lovely, two-handed outlet pass that Matthews handled and converted like a wide receiver. Matthews hit all three of his shots, including a 3-pointer from Gasol’s pass. They’ve faded deep into the Lakers’ woodwork lately, but on Monday they played like veterans do in playoff situations. Gasol now terms himself “Mr. Wolf,” the fixer played by Harvey Keitel in “Pulp Fiction”, a guy who cleans everything up.

“It seems like we’ve played almost 1,000 different styles this year with guys being out,” Matthews said. “Basketball is like life. It’s unpredictable. You go on with it or it’ll go on without you. We have …read more

The performers admit they're honored to be the first K-pop group nominated at the GRAMMYs and send a special message to their Army fandom. Watch!
Why I am running for governor of California: Jeff Hewitt
SHARES
ShareTweet