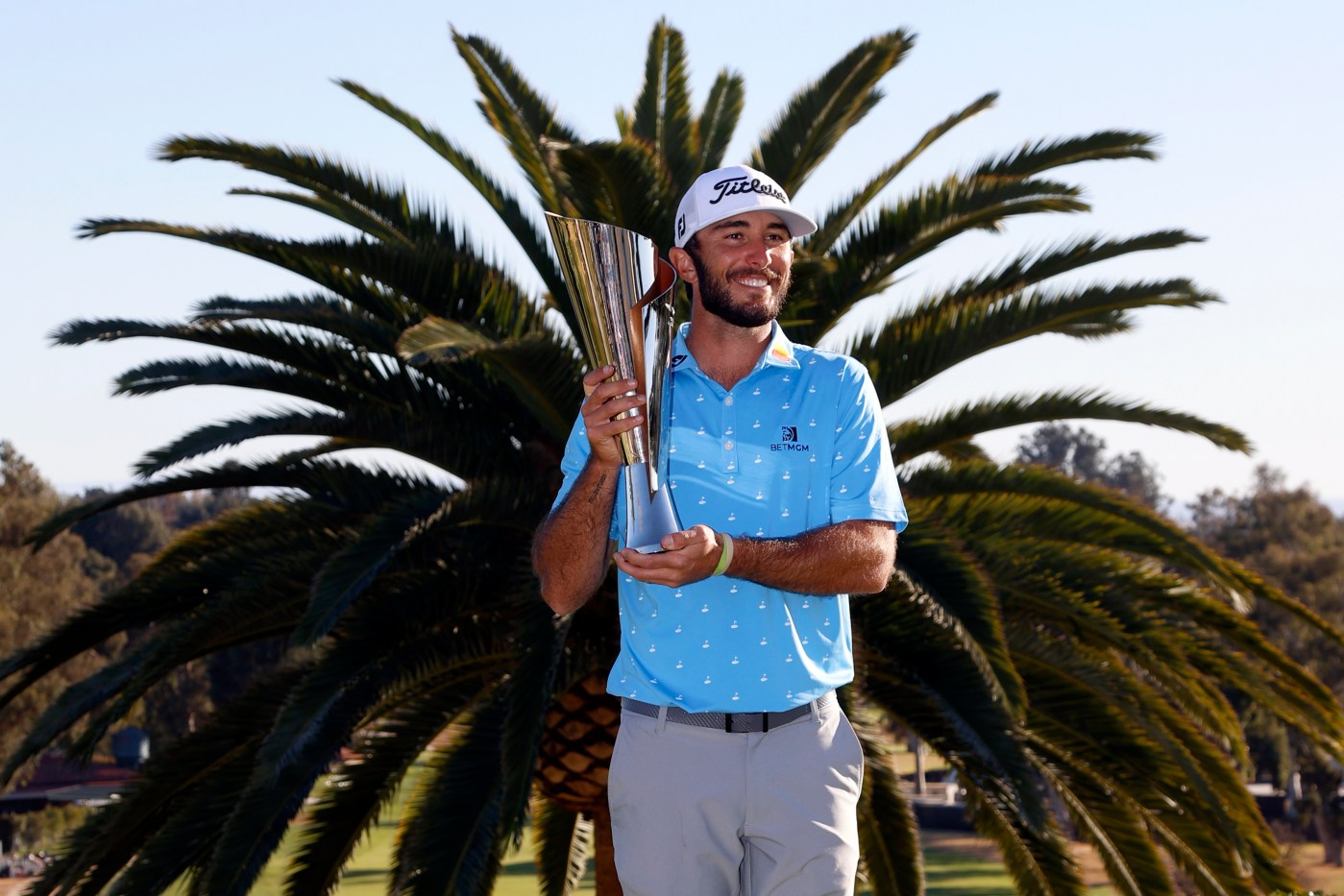 He had been three-and-a-half curvy feet away from winning the Genesis Open, with Tiger Woods bearing the trophy. “It’s pretty embarrassing missing a putt that short in front of him,” Homa would say.

Now he was in a playoff with Tony Finau, who had just shot seven-under-par 64 at Riviera.

There was a minute or two to kill, so Homa called his wife Lacey.

“I think I choked a little bit,” he told her,

Lacey said he had actually played very well, and not to worry. Then she repeated what she had told him Sunday morning.

“She gives me some dumb advice every day before I play,” Homa said. “That was out of left field but that’s the one she came up with.”

Forgiveness must be earned. Homa responded by pulling his tee ball right against a tree trunk, to the left of the 10th green. The shot looked impossible, but Homa saw a way, and he hooded his 50-degree wedge and managed to land it low onto the hill and then let it spin onto the green, where it stopped. Finau did not make his birdie putt, and the game went on.

It ended on the next hole, the 14th, when Finau’s tee shot landed in a deep bunker, and even though Homa missed his birdie, Finau could not rescue par.

It was Homa’s second victory on tour, and it summed up the ethereal nature of winning at golf.  At times it just happens, no matter what you do.Related Articles

Genesis: Max Homa gets another chance and wins hometown event at Riviera

Alexander: At Riviera, sunshine alone is no antidote

Alexander: Can Sam Burns seal the deal at Riviera?

“Our mantra was position over perfection,” said Homa, referring to himself and caddie Joe Greiner. “Leave it in the best spot. Fred Couples has been texting me. He says, ‘Solid golf wins at Riviera.’ I remember playing with Tony and Si Woo Kim at American Express a few weeks ago, when Si Woo won. I observed what they did. It wasn’t anything special. They just played solid golf.”

Homa, from Valencia, was an NCAA champion at Cal. He also lost his PGA card twice, thanks to unreliable driving. Here, he played his final 26 holes without a bogey. Sam Burns had led Genesis from Thursday afternoon and led by three with nine …read more

(Visited 1 times, 1 visits today)
Justin Timberlake APOLOGIZES to Britney Spears and Janet Jackson
On Friday, Justin Timberlake took to Instagram to issue an apology to Britney Spears and Janet Jackson. The singer’s apology comes after ‘The New York Times Presents: Framing Britney Spears’ documentary, which premiered last week and led many viewers to express their ‘disappointment’ and ‘disgust’ with how Timberlake handled their breakup. Other viewers also pointed out his behavior towards Jackson after the infamous ‘wardrobe malfunction’ that occurred during their Super Bowl halftime performance in 2004.
Mars rover’s giant parachute carried secret message

Cuomo says his behavior towards women was ‘misinterpreted as unwanted flirtation’