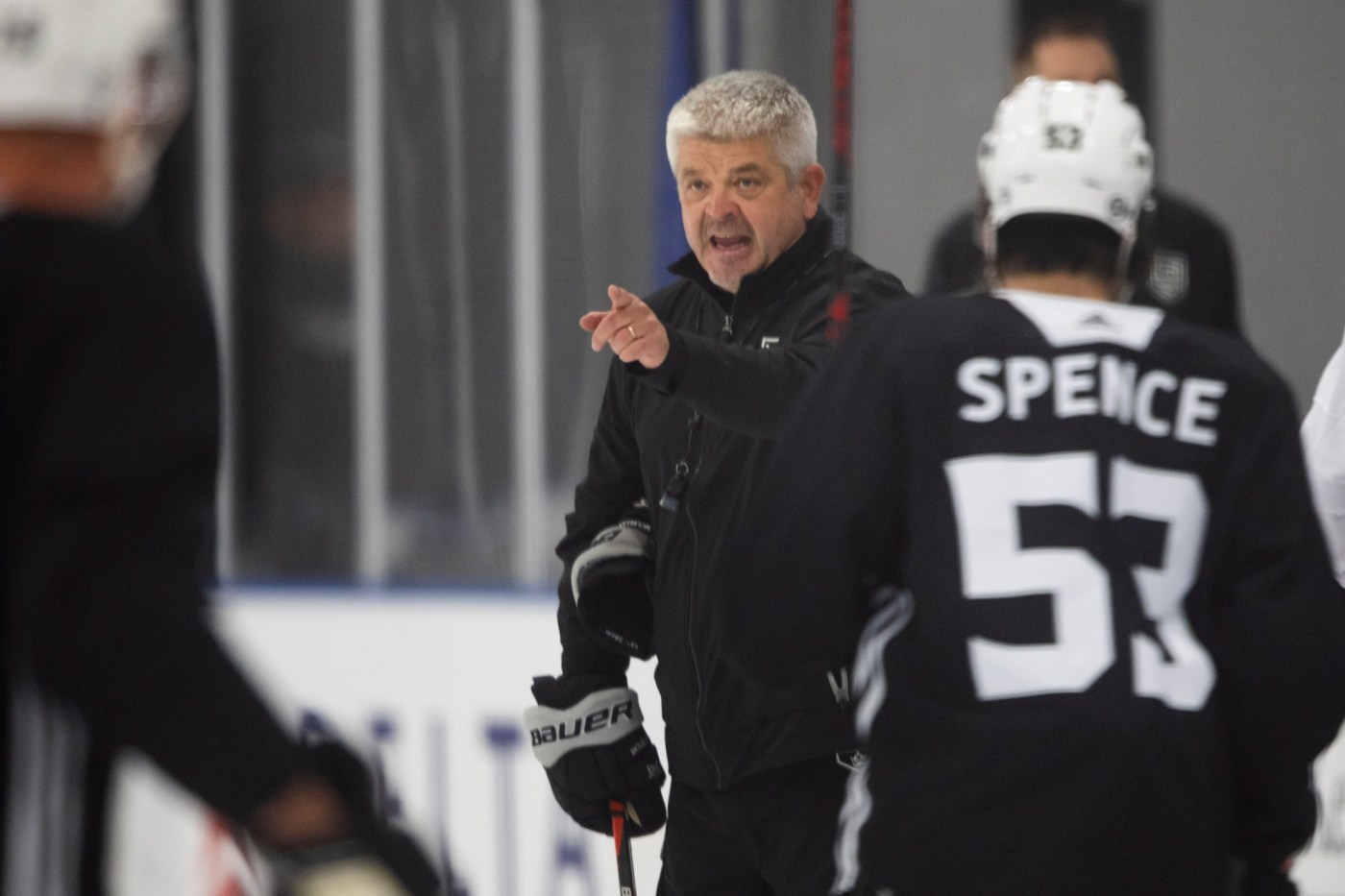 EL SEGUNDO –– As the Kings convened for the first day of training camp Thursday, there was a decidedly different feel from the previous three camps under Coach Todd McLellan.

Although starts in goal were still up for grabs, winger Viktor Arvidsson’s spot on the second line was temporarily available as he recovered from back surgery and the defense corps wasn’t quite set in stone, the Kings were on firm footing entering the new season.

“On the back end, we’ve got a boatload of defensemen that we think can play and they’re going to sort themselves out,” McLellan said. “Up front, where does (Kevin) Fiala fit in is the biggest question. We believe we have him where we think he can fit in, but he’s got to prove that. Will Quinton (Byfield) take the next step in the three hole at center ice? What will our fourth line look like?”

McLellan said he expected goalies Jonathan Quick and Cal Petersen to compete for starts again this season. And while various players will get a shot to skate on the right side of the second line – on Thursday, it was Samuel Fagemo – he envisions a reunion of Phillip Danault, Trevor Moore and a healthy Arvidsson before long.

Smoldering questions aside, there won’t be any major surprises as to who makes the roster nor to where they slot into the lineup, in stark contrast to the course of campaigns past laden with all the bumpiness of a rebuild.

“When I first got here, it was kind of like we kind of grabbed a bunch of guys and said go figure it out, see who’s going to grab the roles and all that kind of stuff,” Moore said. “Now we’ve had a moderate level of success and we’re trying to build on that.”

Widely projected, predicted, modeled and flat-out condemned last year to muddle through another forward-facing season, the Kings instead seized the moment. Despite a 1-5-1 start and a mountain of injuries, especially on defense, the Kings finished with 99 points and came within one win of eliminating a team that featured two players who had won both been scoring champions and MVPs.

Where playing faster and ramping up aggression were themes in the past, this season the word of the day on Day 1 was “expectation.” While lofty standards may be new to some of the younger players on the roster, Quick, Drew Doughty and Anze Kopitar have plenty of experience to draw upon in dealing with such pressure. After winning the Stanley Cup in 2012, they pieced together a deep run that ended in the 2013 conference finals. After they ascended back to the peak in 2014 for a second Cup, they missed the playoffs altogether in 2015.

On Thursday, Kopitar said unequivocally, “expectation” was a positive thing.

“It means we’re doing something right, so it’s definitely a good feeling,” the Kings’ captain said.

Perhaps the most scintillating possibility for the Kings is the potential explosiveness of Kopitar’s line. Last year, he helped Adrian Kempe soar to new …read more