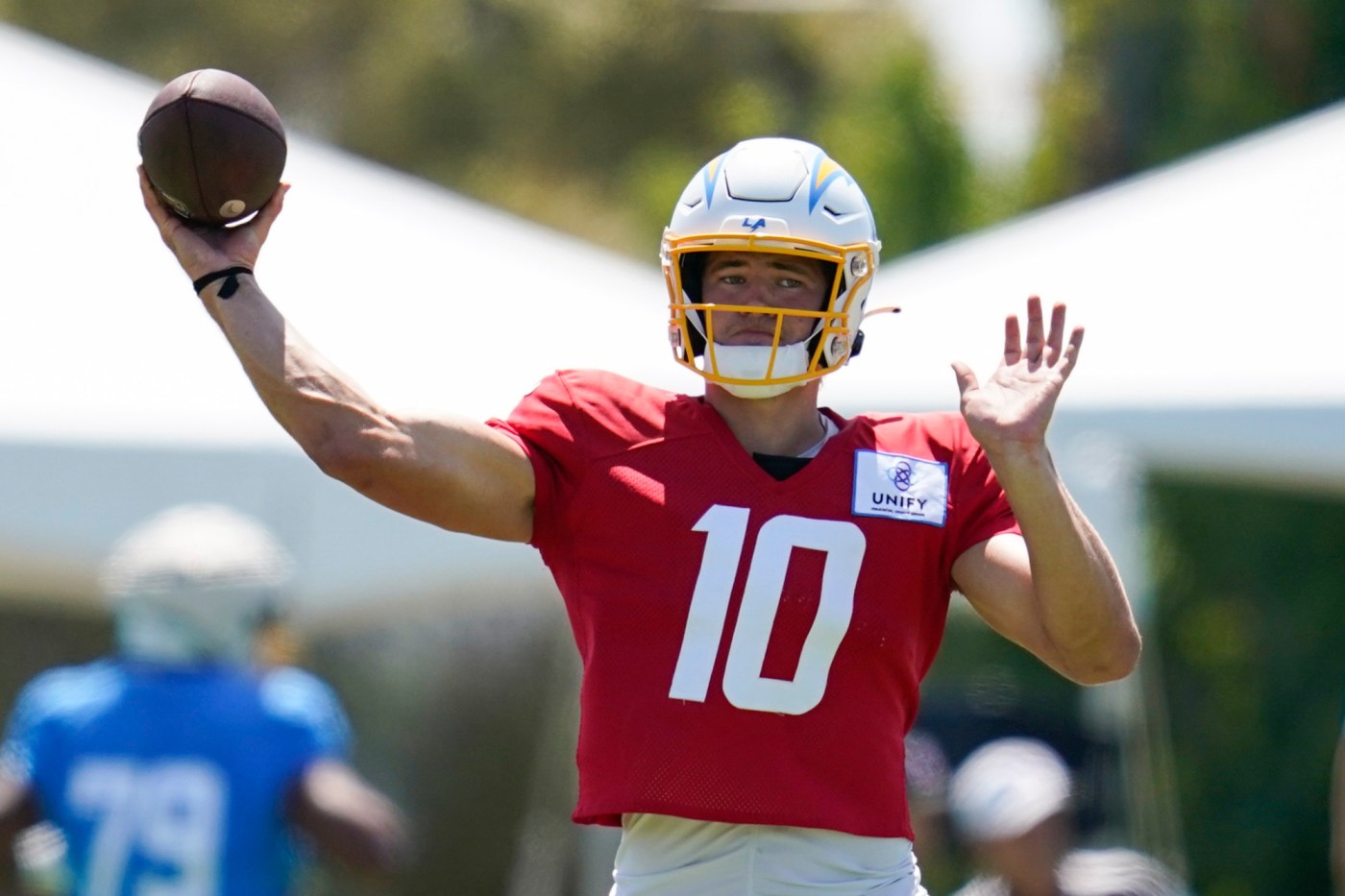 Herbert warmed up with fellow quarterbacks Chase Daniel and Easton Stick, tossing a few easy passes to start Thursday’s practice. He continued throwing during the individual portion of practice, the part reporters were granted access to before they were sent packing.

Herbert didn’t throw during the individual portion of Wednesday’s practice, so Thursday’s action represented a step in the right direction. Officially, his participation was listed as limited for the second day in a row.

It remains to be determined whether Herbert will play Sunday against the Jacksonville Jaguars at SoFi Stadium, 10 days after he suffered fractured rib cartilage while absorbing a hit after completing a fourth-quarter pass in the Chargers’ loss to the Kansas City Chiefs on Sept. 15.

Herbert on Thursday looked pretty much as he has usually looked during recent practices, delivering on-target passes with a fluid motion. He didn’t appear to be in discomfort while completing passes that were in the 30- to 40-yard range at their longest, featuring typical routes that his receivers run.

Daniel is likely to start if Herbert can’t play Sunday, with Stick serving as his backup. Daniel has been Herbert’s backup for the Chargers’ first two games and Stick has been inactive for a victory over the Las Vegas Raiders in Week 1 and a loss to the Chiefs in Week 2.

“You have your game plan and there’s a handful of plays that might be Justin-only,” Chargers offensive coordinator Joe Lombardi said. “But you put a plan together and most of it spans whatever quarterback plays. We’ll be all right. There might be a handful of plays you scratch out if Justin is not playing.

Herbert has thrown for 613 yards, the fifth-most in the NFL to start the season, and completed 72% of his passes (59 of 82) with six touchdowns and one interception. He has thrown three touchdown passes in each of the first two games. His passer rating of 112.5 is the seventh-best in the league.

In other words, there would a huge void if Herbert can’t play.

“Pretty impressive,” Lombardi said of Herbert’s ability to return to the game after his injury to lead a 73-yard scoring drive that cut the Chargers’ deficit to 27-24 with a little more than a minute to play. “You’re certainly concerned, but the three toughest guys I’ve ever been around are (Drew) Brees, (Matthew Stafford) and Justin. It’s pretty impressive that he could do that under those conditions.”

Chiefs tight end Travis Kelce and his brother, Jason, a Philadelphia Eagles center, have a popular podcast in which they talk about football in blunt (and funny) fashion. Naturally, the topic of Derwin James Jr.’s body slam of Travis in last week’s Chargers-Chiefs game came up on their latest episode.

Jason: “How did it feel when Derwin James body-slammed the (expletive) out of you on national television?”

The performers admit they're honored to be the first K-pop group nominated at the GRAMMYs and send a special message to their Army fandom. Watch!
Here are two ways to get proactive about cleaning up our roads and streets: Roadshow
SHARES
ShareTweet