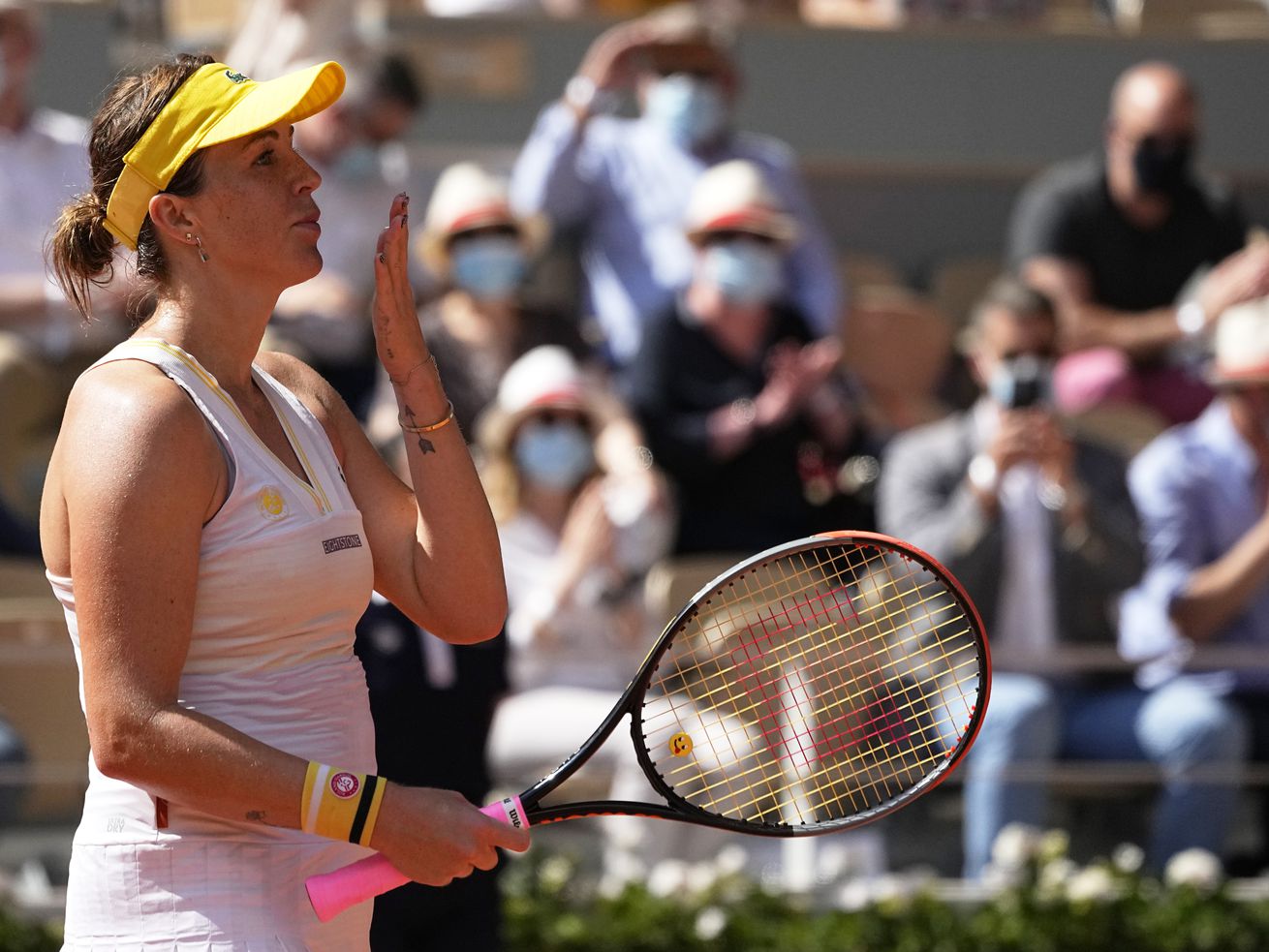 Anastasia Pavlyuchenkova throws a kiss to the audience after defeating Tamara Zidansek in their French Open semifinal match. | Michel Euler/AP

It was only the second time in the professional era that there were four first-time Grand Slam women semifinalists at a major tournament, and the first time since the 1978 Australian Open.

PARIS — Unseeded Barbora Krejcikova of the Czech Republic overcame a match point and an apparent blown call Thursday, and advanced to her first Grand Slam final by outlasting No. 17-seeded Maria Sakkari of Greece 7-5, 4-6, 9-7 at the French Open.

A questionable ruling by chair umpire Pierre Bacchi in the final game briefly delayed Krejcikova’s victory, but five points later she hit a backhand winner to close out the biggest win of her career.

Her opponent Saturday will be 29-year-old Russian Anastasia Pavlyuchenkova, who also advanced to her first major final by beating unseeded Tamara Zidansek, 7-5, 6-3.

It was only the second time in the professional era that there were four first-time Grand Slam women semifinalists at a major tournament, and the first time since the 1978 Australian Open.

Krejcikova, a two-time major doubles champion ranked 33rd, is playing singles in the main draw of a major tournament for just the fifth time.

The No. 31-seeded Pavlyuchenkova, by contrast, has played in more majors before reaching a final — 52 — than any other woman. A top-20 player as a teen, she had been 0-6 in major quarterfinals before finally surmounting that hurdle on Tuesday, and was steadier than the big-swinging Zidansek in their semifinal.

“I wanted this so much that right now I don’t feel anything,” Pavlyuchenkova told the crowd in French.

Later, she pledged to enjoy the final because it has been such a long time coming.

“I had my own long special road,” she said. “I was very close to semifinals couple times, but then it wouldn’t happen.”

In the second semifinal, Krejcikova erased a match point in the ninth game of the final set with a swinging volley for a nervy winner, and 40 minutes later they were still playing.

With Krejcikova holding a match point in the final game, Sakkari hit a forehand near the baseline. Krejcikova stopped and raised her arms in triumph, but Bacchi climbed off his chair, took a look, called the shot good and ordered the point replayed.

A TV replay indicated the ball was clearly long, but video review isn’t used at Roland Garros, where the balls usually leave clear marks in the clay.

Krejcikova kept her cool and was celebrating for good moments later after converting her fifth match point.

There wasn’t as much drama in the day’s first match, but the quality of play was as enjoyable as the warm, cloudless weather. The 85th-ranked Zidansek, who this week became the first Slovenian woman to reach a Grand Slam quarterfinal, was the better player for much of the first set, moving well and hitting the more aggressive groundstrokes.

But Pavlyuchenkova won the most important points, …read more

Tucker Carlson baselessly claims ‘FBI operatives were organizing the attack on the Capitol,’ his latest whitewashing of Jan. 6