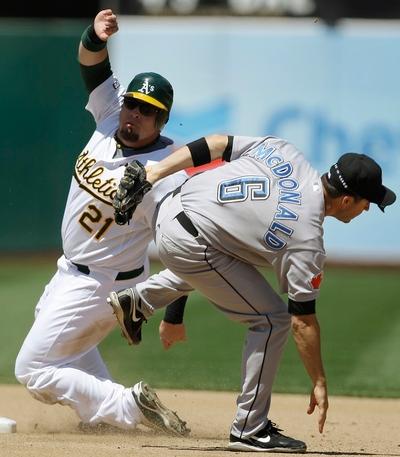 With new manager Mark Kotsay at the helm, the Oakland A’s switched up their coaching staff heading into the 2022 season.

The team officially added Brad Ausmus as the team’s bench coach, a MLB manager for five seasons with the Detroit Tigers from 2014 to 2017 and Los Angeles Angels in 2019. Ausmus provides managing experience behind Kotsay, who will make his big league managerial debut next season in place of Bob Melvin, who left to manage the San Diego Padres.

Tommy Everidge, 38, spent eight seasons as a hitting coach in the A’s farm system, working his way up as a coach for Short-Season Vermont in 2014, then Single-A Stockton, Double-A Midland and ending as the Triple-A Las Vegas hitting coach in 2021.

The hitting coach changes come on the heel of a disappointing offensive season for the A’s, who missed the playoffs despite boasting a roster lined with hitting talent. As a team, the A’s .723 OPS ranked 15th in MLB and their .238 ranked 21st. Their 199 home runs ranked 13th in MLB.

Though this A’s team may look different in 2022 in 2021 as they are likely trade some of their offensive stars — most likely Matt Olson and Matt Chapman — the A’s are looking to re-ignite their an offense that fell into mediocre territory last season.

A hire 20 years in the making: How Mark Kotsay became the Oakland A’s newest manager

Everidge, a Santa Rosa native, was drafted by Oakland in the 10th round of the 2004 draft and played six years in the A’s system during his nine-year professional career.

Cron, father to MLB player C.J. Cron, joins as the A’s assistant hitting coach from the Arizona Diamondbacks organization. The 57-year-old was a minor league coordinator last year and collected 20 years a a minor league manager for the Chicago White Sox and Detroit Tigers between. Starting in 2014, he worked as the Diamondbacks minor league hitting coordinator for four seasons. He last managed the Triple-A Reno team in 2019.

Bush and Martins remain on staff and move onto the diamond. Bush will take Kotsay’s old role as third base and run prevention coach. Martins will slide over to first base and infield coach. Mike Aldrete, the first base …read more